In For your eyes only Bond catches up with Melina aboard the M/Y Triana in Corfu where her father’s yacht is anchored. Sir Timothy Havelock, Melina’s father, has been asked by the British government to locate the wreck of the British spy ship, the St. Georges, and is using the bay as a base for his secret research. The St. Georges is said to have sunk in the Ionian Sea off the Albanian coast, which is accurate since Corfu is situated right between Greece and Albania. A large part of Corfu extends above the Albanian territory. 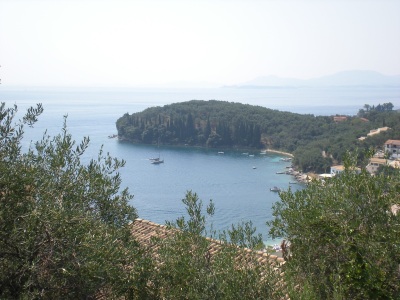 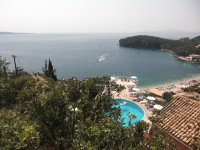 Havelock has anchored the yacht in Kalami bay, approx. 30 km north of Corfu town. It is truly a beautiful drive along the coast and Corfu has a lot of memorable roads. When driving up the coastal road you should put on the appropriate music and enjoy the beautiful scenery because this is definitely a road to remember. In the very beginning we see Sir Timothy Havelock study some charts, marking a position in his daily log, and the charts on his desk show just this particular coastline of Corfu, including Kalami bay.

“Go back to the Triana and wait. I’ll come strait to Corfu I promise…”
–Bond to Melina-

It is here that Gonzales kills Melina’s parents aboard the Triana in the beginning of the film, just after dropping off Melina from his sea plane.

This small fishing village was home to the British novelist, travel writer and poet Lawrence Durrell, and his brother Gerald, who both lived here in the late 1930’s. Their house is called “The white house” and is seen in the picture above, just by the water. The top floor, apparently where the Durrell brothers lived, is available for rent during the summer season. It can also be rented during the winter season on request.

Corfu provided a huge number of locations in For your eyes only and it is understandable why Sir Roger wanted to rush off to Corfu after his trip to Cortina d’Ampezzo. He probably wanted to warm up after all the snowy action in the Italian alps.

Even though Bond and Melina do some diving in Corfu all the underwater scenes were filmed in the Commonwealth of the Bahamas (apart from the close ups of Sir Roger and Carole that were filmed on a dry sound stage due to Carole’s diving problems).