Today, Monday 24th of February, is a special day that marks the addition of Noble House to the blog. In 1988 Pierce Brosnan starred in a TV miniseries based on a novel by James Clavell called Noble House. The original story is set to take place in Hong Kong in 1963 but the storyline in the television series has been updated to the late 1980’s. Brosnan portrays the main character Ian Dunross Struan, who is Tai Pan (supreme leader) of Struan’s, the biggest and oldest of the British East Asia trading companies in Hong Kong. The most powerful company in Hong Kong is called the “Noble House”, a title that Struan’s has possessed for decades. The evil Quillan Gornt, head of the company Rothwell-Gornt, is trying to destroy Struan’s in order to become the Noble House.

A lot of old Bond locations appear in the series and besides Mr Bond himself, a few familiar faces from the Bond series have leading roles. The most distinctive Bond location seen in Noble House is The Dragon Garden in Hong Kong. Starting with this post I will cover a few of the Hong Kong and Macau locations from the series.

When John Chen is kidnapped and Dunross is summoned to Philip Chen’s house he walks through Chen’s garden. The location is immediately recognisable from The Man With the Golden Gun where the Dragon Garden was the estate belonging to the villain Hai Fat (supposedly located in Bangkok). Some interior scenes were also filmed on location in Noble House and Chen’s living room is probably the same room as where the killing of Hai Fat was filmed in Golden Gun. 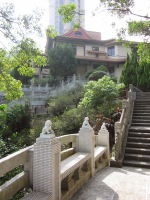 In Noble House Brosnan is walking down the same path as Sir Roger had done 15 years earlier. The exterior of the main building however did not feature as prominently in Golden Gun as it did in Noble House. When Dunross is shown into the house for the meeting with Chen and the Chief Inspector of the Royal Hong Kong Police you get a good look at the exterior.

Later in the first episode, Phillip Chen runs down in the garden. The same bridge that Hai Fat walks across in Golden Gun (covered here) can then be seen.

The entrance to the garden with the characteristic red doors can also be seen in the first episode of Noble House. John Chen is climbing over the wall into his parents’ garden and the inside is then visible. The same doors can of course be seen in The Man With the Golden Gun (also covered earlier).

Today the front doors and the wall have been renovated and probably moved back, since the main road that runs alongside the garden has been widened. But the distinctive red doors can still be found at the entrance.

The first compradore of the Noble House, Philip Chen, is played by non other than Burt Kwouk. Kwouk’s connection with the Bond series started in Goldfinger when he played the Chinese villain Mr Ling, and continued in You Only Live Twice where he played one of the Spectre agents in Blofeld’s volcano. Kwouk is perhaps most known for his role as Cato, the butler of Chief Inspector Clouseau in the Pink Panther.

The “bad guy” in the series, trying to overthrow the Noble House by selling short the Struan stock, is Quillan Gornt. He is played by John Rhys-Davies, who of course is familiar from The Living Daylights where he played Russian General Pushkin a year before Noble House.

The miniseries appears to have a fairly high budget and is well worth watching. The soundtrack is very memorable and the locations are a pleasure to watch. Overall the performances of the main cast is very good (Brosnan is always very entertaining) and the story has a lot of surprises. It is a must see for any Bond fan and it is also a veritable promo for Hong Kong as a tourist destination.